As of March 31, the AFM-EPF’s fiscal year of 2018-19 has come to an end. In February, we were notified that actuaries project a strong likelihood that the Fund will enter “critical and declining” status after being in critical status since 2010. You may click here for the text of the full notification, which is posted on afm-epf.org.

Over the next two months, the Fund’s actuaries will collect and analyze the year-end data and prepare actuarial projections to determine whether our Fund will remain in “critical” status or move into “critical and declining” status for the new fiscal year.

I recommend that you visit the Fund’s Website and check out the “Staying Informed” tab for more detailed explanation, but I wanted to provide as clear an explanation here as possible.

The Fund is facing the challenges it faces today due to a loss it took in the Crash of 2008 in combination with several other factors. These are some of those factors: (1) the loss in the downturn, (2) a commitment of paying benefits which outweigh contributions coming in, (3) a decreased number of participants for whom contributions are being made, (4) greater numbers of retirees receiving benefits, (5) and a rising mortality rate in the population.

As a result, we are now reaching a moment of decision for the Fund, as no level of income – for either investments or contributions – is realistically attainable to correct the problem.

The Choices Before Us

For the time being, two options are available (unless legislative changes are made at the federal level – and I’ll get to that later…) One is to move forward as we have been, without any adjustments to benefit structure. In this case, the fund is projected to go insolvent in 20 or so years.

The only other option currently available to the Trustees is through provisions of the Multiemployer Pension Reform Act (MEPRA). Through MEPRA the Fund can apply for a reorganization of benefits if – and only if – the fund is designated “critical and declining” status. After the Fund enters this classification, it may — after a rigorous process of application to the Treasury Department and participant approval — reduce benefits for the purpose of saving the fund itself.

Given the stark circumstances, the Trustees are forced to choose between basically doing nothing (eventually running the fund into insolvency), and considering a plan to reduce current benefits for retirees. I certainly know that our Trustees have been suffering facing this horrible choice.

Last Sunday, it was announced that if the Fund does reach critical and declining status this year (which is likely), the Trustees will move to make an application to the Treasury Department by the end of 2019 or early 2020. The many faceted approval process would take at least a year – if approved at all – and reductions would not begin until late 2020 or early 2021 at the earliest. The latest notification from the Fund details factors, guidelines and limitations of how reductions could be approached as well as hypothetical ways that reductions could be calculated. For example, MEPRA requires that reductions avoid insolvency but not be any greater than is necessary. They must be shared equitably, and many participants are protected from any reductions at all (Please refer to the notification, for more detail).

One of the requirements for the Fund making this application is to appoint a retiree representative to advocate for retired participants and beneficiaries. On Sunday, the Fund announced that Brad Eggen, President of the Twin Cities Musicians Union in Minnesota since 1990 has been appointed in this capacity. A retired trumpet player, music educator, and respected attorney, Brad remains one of the most respected local officers in the AFM. He has been brought into the process in recent months, will have the support of a third party legal and actuarial team, and has expressed his commitment to representing and keeping retirees informed as MPRA alternatives are examined.

While the Trustees are now announcing these plans if the Fund goes critical and declining, it is important to remember that other solutions – not yet available to us – are still being sought. The introduction of the “Butch Lewis Act” in the Senate a little over a year ago was a game changer, which if enacted would save our Fund without making any cuts to benefits. While this bill did not make it out of the Senate last year, it spurred a bi-partisan effort to find a solution. Since that time, the Joint Select Committee on Solvency of Multiemployer Pension Plans was established and worked on a solution. While no bi-partisan recommendation was reached, the Committee announced late last year that it would continue its work. In January, in the newly Democrat-controlled House, a new version of the Butch Lewis Act was introduced by a bi-partisan group. Given the new dynamics at Capitol Hill and the upcoming election season, we see some momentum in the fight for its passage.

If a solution in this form is achieved, the Fund has indicated that it can and will withdraw its application under MPRA. It is important to remember that an application for a restructure of benefits under MPRA is an unhappy choice, and will be pursued because it is the ONLY currently available course of action to avoid future insolvency.

Through all of this, we have witnessed much activism on behalf of retirees and the promises made to them for their pensions. The voice of these Americans is important and strong, and absolutely necessary to bring attention to our legislators who have the power to correct the problem. I applaud the spirit motivating our retirees and other members to this activism, but a good deal the rhetoric has been in the form of blame heaped on our own Trustees and the Fund itself. While the purpose of this may be to pressure the Trustees away from pursuing solutions through MEPRA (avoiding cuts to benefits), it does not confront the dangers that now threaten the Fund’s survival.

The key to understanding the context of all this is that pursuing alternatives under MEPRA is the only option we currently have to address the problem. By taking this path, we are preparing for the worst case scenario with the tools we now have. In the meantime, we also advocate for better solutions which our representatives in Washington have the power to establish. There has been progress in recent months. Now more than ever, it is important to make your voice known. 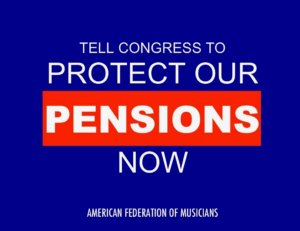 Click here to contact your Representatives in Washington. Let them know that the survival of our multiemployer pensions is vitally important, and that you support the 2019 Butch Lewis Act.