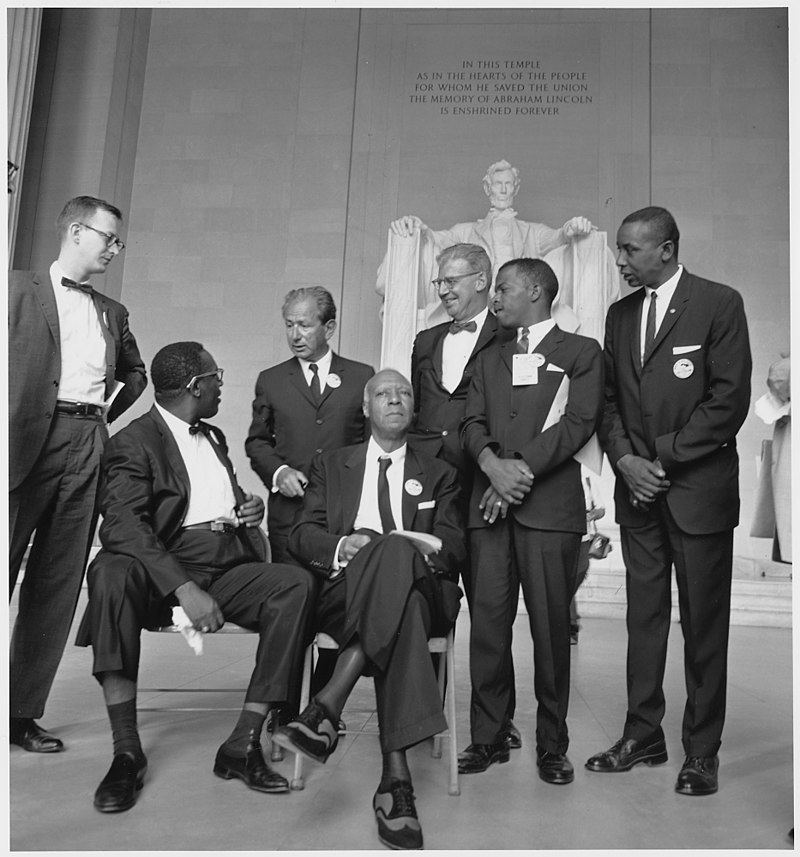 Civil Rights March on Washington, D.C. [Leaders of the march (from left to right) Mathew Ahmann, Executive Director of the National Catholic Conference for Interracial Justice; (seated with glasses) Cleveland Robinson, Chairman of the Demonstration Committee; (standing behind the two chairs) Rabbi Joachim Prinz, President of the American Jewish Congress; (beside Robinson is) A. Philip Randolph, organizer of the demonstration, veteran labor leader who helped to found the Brotherhood of Sleeping Car Porters, American Federation of Labor (AFL), and a former vice president of the American Federation of Labor and Congress of Industrial Organizations (AFL-CIO); (wearing a bow tie and standing beside Prinz is) Joseph Rauh, Jr, a Washington, DC attorney and civil rights, peace, and union activist; John Lewis, Chairman, Student Nonviolent Coordinating Committee; and Floyd McKissick, National Chairman of the Congress of Racial Equality.]

On August 28, 1963 more than 200,000 Americans gathered in Washington DC for a political rally which became a key moment in the struggle for civil rights in the United States. On that day, Dr. Martin Luther King Jr. inspired millions across the world with the delivery of his immortal “I have a dream” speech on the steps of the Lincoln Memorial.

In many ways that march and that speech defined the virtue and ideals of an era struggling for and through progressive change – a struggle which continues today.

What we often forget is the place of organized labor in bringing about this watershed event.

When looking over photos documenting this history-changing event, one sees the two principal organizers of the event at Dr. King’s side. One is A. Philip Randolph who had been an African American Union leader (National Brotherhood of Workers of America and the Brotherhood of Sleeping Car Porters) for more than 40 years, and now considered the father of the modern American civil rights movement. Randolph’s protege Bayard Rustin, who can also clearly be seen in those pictures, had been cutting his teeth organizing non-violent protest for decades. 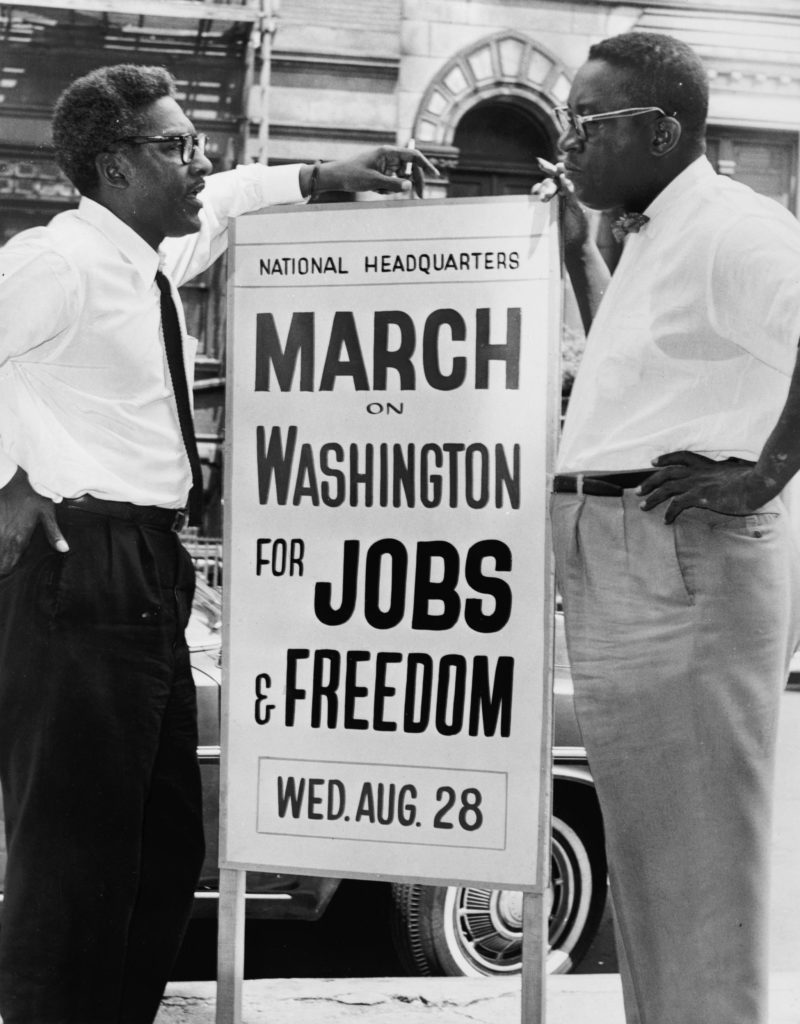 The idea for the March on Washington actually began back in 1941 when these two began organizing such an event. The 1941 march was canceled only after successfully pressuring President Roosevelt to issue Executive Order 8802 (the Fair Employment Act), banning discrimination in defense industries and federal agencies. The two got back together in 1948 successfully pressuring President Truman to enforce and expand the order, and finally completely desegregating the US armed forces. It was in 1955 when these two brought their organizing expertise to Montgomery, Alabama and teamed up with King to organize the historic bus boycott. It was labor leader Randolph who brought Rustin to King to advise him on organizing tactics and non-violent Gandhian methods. It was this partnership that sowed the seeds for the 1963 March on Washington. Successfully forging an alliance between the civil rights movement and the labor movement, Randolph envisioned and planned the March, chose Rustin to organize it, with King carrying the day as the last of the speakers televised live across the nation.

Inspired by the success of the March, the two went on to found the A. Philip Randoph Institute (APRI), which continues today with its belief that workers’ rights and civil rights are inseparable, “that blacks and working people of all colors share the same goals: political and social freedom and economic justice.” (www.apri.org) Rustin went on to run the APRI and became a regular columnist for the AFL-CIO newspaper. In 1964, President Johnson awarded Randoph the Presidential Medal of Freedom, the highest civilian award in the United States. In 2013, President Obama posthumously bestowed the same honor upon Rustin.

Reflection on the March on Washington for Jobs and Freedom not only brings to mind its accomplishments and the heroes who led it, but the true power of organizing and collective action. When we speak of organizing our members to stand for fair wages and conditions for musicians, we are employing the same methods and principles as Randolph, Rustin and King. We honor these leaders on whose shoulders we still stand.