Musicians held a press conference on March 13 in Los Angeles calling on the Alliance of Motion Picture and Television Producers to engage in fair contract negotiations and protect the future careers of professional musicians as the industry shifts to streaming and online distribution (aka “new media”).

The press conference took place on the first morning of negotiating with the studios and highlighted the fight by musicians to secure a place in today’s new technological landscape. As new media consumption has grown, studios have agreed to pay streaming residuals for actors, writers, directors and others when films are made for streaming, but musicians have been uniquely excluded.

“Many of us have been working in the film and television industry for years and know the importance of evolving alongside continual changes in technology,” said Dylan Hart, AFM Local 47 member and studio musician. “Musicians want the industry to advance and grow, and our careers and our contracts have to adapt along with it.” 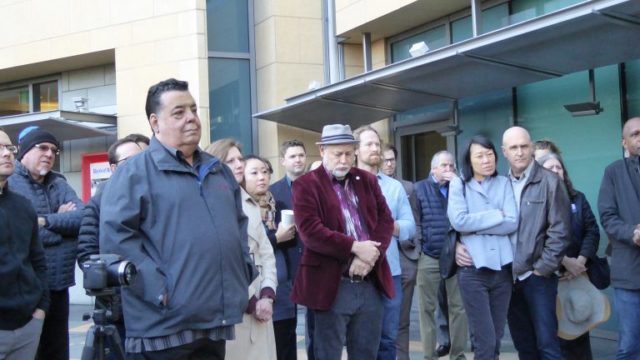 Musicians currently receive residual payments for secondary-market uses of theatrical and TV films, but not for films made for the internet. The ability of musicians to earn a living wage in the film industry is in jeopardy with the transition toward digital consumption.

“As streaming consumption grows, the absence of streaming residuals will prevent musicians from being able to afford a home and feed their families, and threatens to erode the major contributions our members make to our local communities,” said Ray Hair, AFM International President. “AFM members must take on the changes in technology by ensuring that we maintain good jobs and a rightful place in the future of the industry. We are seeking a productive dialogue with AMPTP as we work to reach a fair resolution of these negotiations.”

“Working people in the entertainment industry must face the changes in our business together,” SAG-AFTRA President Gabrielle Carteris shared in a letter of support of AFM musicians. “For generations, we have fought for quality jobs and won. Now, as the industry moves toward new media, we believe it is time to stand together again. Our members recognize the tremendous value that musicians bring to our films and television shows, and we support their demand for a fair contract for streaming.